“Thou shalt love the Lord thy God, with thy whole heart, and with thy whole soul, and with thy whole mind, and with thy whole strength. This is the first commandment” (St. Mark 12:30). The soul of the religious life in the tradition of the Catholic Church is the organized, vowed state oriented to the full realization of evangelical spiritual perfection and perfect charity regarding God and neighbor. The essence of the Carmelite charism is to pursue, by the action of divine grace in the soul, the radical transformation, spiritual fecundity, and divine union that are the blessed fruits of ardent penance, spiritual purification, assiduous meditation and loving contemplation of the Triune God. Simply seeking “the one thing necessary…the best part which shall not be taken away” (St. Luke 10:42), the Carmelite is not to be a specialist in any human occupation but in the spiritual life: the life of grace, charity and the other virtues in the soul. The Religious strives to “walk worthy of God, in all things pleasing; being fruitful in every good work, and increasing in the knowledge of God” (Colossians 1:10). A soul called to live the Carmelite charism in its primitive form in the Discalced Hermits of Our Lady of Mount Carmel follows Our Lord in the way of perfection by a religious formation and observance based on the religious life of the ancient Carmelite community on Mount Carmel in the 1200s and of the contemplative and eremitical “Holy Deserts” established by the Discalced Carmelite Reform in the 1600s. The reformed Carmelites were called “discalced” or “contemplative” Carmelites, and amidst their work of reform, they revived and reinstated the eremitical contemplative religious life of their ancient forefathers on Mount Carmel.

Fully observing this ancient observance, the semi-eremitical contemplative religious life of the Discalced Hermits of Our Lady of Mount Carmel is vivified especially by the assiduous practice of mental prayer, sacred liturgy, spiritual study, fraternal charity, silence, solitude, and penance. In addition, as reformed, specifically discalced or “barefooted” religious, the Discalced Hermits of Our Lady of Mount Carmel observe a unique religious poverty and austerity that is not common in the secular world or even in most religious communities today. Thus, the Hermits forego most modern conveniences like electricity, modern heating and cooling systems, etc. Rather, employing wood for cooking and heating, candles for lighting, and manually transporting water and other necessities, we cultivate a greater simplicity and a more rustic and virile lifestyle, which serve as powerful aids to recollection, contemplation, and penance, in opposition to a modern world that is estranged from the interior life and enslaved by physical comfort and convenience. The unmitigated Rule of St. Albert lays the foundations of this religious observance, which provides the Hermit with the fullness of the exterior means to attain to that interior sanctification which is the fruit of Christ’s Saving Cross and is the beginning of eternal beatitude, and this work of sanctification and union with God deeply benefits the entire Catholic Church in powerful ways.

Therefore the Discalced Hermits of Our Lady of Mount Carmel strive, through the grace of Christ, to imitate and be conformed to the Blessed Virgin Mary’s inexhaustible adoration and contemplation of the Most Holy Trinity. Consecrated to that heavenly Queen, whose Holy Habit they wear, they follow the example of the holy prophet St. Elias who, as a contemplative solitary, lived in the presence of the Living God (cf. III Kings 17:1). Zealous for the glory of the one true God and the sanctification and salvation of souls, their life of prayer, sacrifice, and love conforms the Hermits, through their union with Christ Crucified and the omnipotent prayer of that Great High Priest, to Christ the Saving Victim, thus interceding for the needs of all those for whom the Savior shed His Precious Blood, especially in those matters which only prayer and divine grace can remedy: “Human activities cannot help us, but only the suffering of Christ. It is my desire to share in it.”1 However, following the pattern of their ancient predecessors on Mount Carmel, in addition to the hidden influence of their prayers and sacrifices, the priests of the community can exercise their priesthood spiritual direction and preaching.

To the solitude of mountain or desert it was, then, that our Saviour retired when He desired to pray; although we read that He came down from the mountain when he wished to preach to the people….He who planted our Fathers in the solitude of the mountain thus gave Himself to them and their successors as a model…They tarried long in the solitude of the desert, conscious of their own imperfection. Sometimes, however, though rarely, they came down from their desert, anxious, so as not to fail in what they regarded as their duty, to be of service to their neighbors, and sowed broadcast of the grain, threshed out in preaching, that they had so sweetly reaped in solitude with the sickle of contemplation.2

Thus, following St. Elias in his loving service to the Israel of God, the Church, the Hermits labor that God might be glorified in an ever-growing number of souls in the Mystical Body of Christ, the Church. “And I brought you into the land of Carmel, to eat the fruit thereof, and the best things thereof” (Jeremias 2:7).

1St. Teresa Benedicta of the Cross 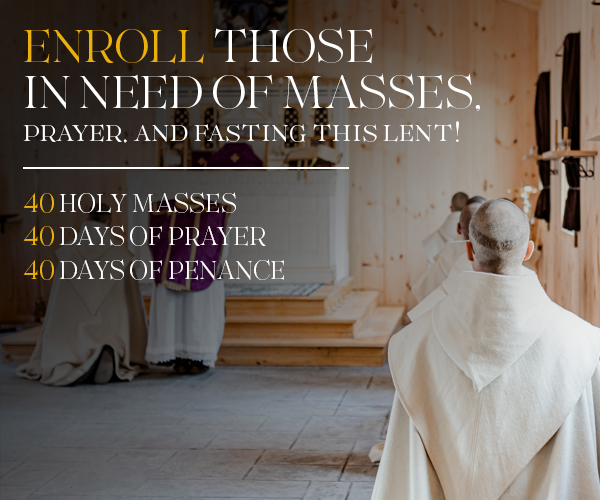